The Alaskan Husky, rather than a specific breed or crossbreed, is a category of crossbred dogs that are working sled dogs. They are produced by mating a number of purebreds and crossbreeds, but Alaskan Huskies are similar in appearance and temperament; dogs of this category are independent, playful, and hardworking. While some are kept as pets, these dogs' primary purpose is pulling sleds.

All Alaskan Huskies are working dogs--and work, they absolutely will. This category of crossbreeds, which is itself included as part of the Spitz breed type, has been developed through the years with the specific intention of creating the best working dog possible, especially in regards to sled-pulling skills. These dogs are affectionate and fairly intelligent, but anyone considering having an Alaskan Husky as a pet will need to devote plenty of time to its training, exercise, and discipline. Despite subtype differences in genetics, most Alaskan Huskies are similar in appearance (medium in size and coat length) and temperament (independent, friendly, and active). Consider these Alaskan Husky dog facts:

The Alaskan Husky is a category of crossbred dogs developed to be athletic working dogs; many are used as sled dogs, so they are often multi-generational crossbreeds of several purebreds--an arctic breed like a Siberian Husky or an American Eskimo Dog is usually one parent, while a fast breed like a Greyhound or a Pointer dog is often the other. Alaskan Huskies are medium-sized, extremely active, usually even-tempered, and very independent. While not known for having great intelligence, these dogs are fairly smart, easily trained, and socialize well with other canines.

These dogs are normally puppies at heart; they enjoy fun and games, but are usually clever and ingenious, and their independent streaks mean they will engage (or not) in any activity they desire. And if one of those desired activities is running free, a tall fence probably won't keep them in--these dogs are fantastic jumpers. These Huskies also have voracious appetites and will overeat if allowed to, but their high activity levels help them burn calories, so they're not as prone to obesity as some other breeds. Even so, owners will want to monitor their Husky's diet to make sure the dog remains healthy.

Most Alaskan Husky breed info contends that these are some of the most athletic dogs in existence. Since their main purpose is sled racing, these Huskies are blessed with great speed and even greater endurance. While not incredibly strong, they have plenty of strength for their size. Alaskan Huskies are incredibly athletic; a Husky would gladly perform marathon training with its owner, and hardly break a sweat.

Since the Alaskan Husky is a "category" of dog rather than a distinct breed all its own, true Alaskan Husky history can be quite muddled. Anthropologists believe that early variants of these dogs were created starting thousands of years ago in the villages of indigenous Alaskan and Canadian peoples. Native tribes such as the Innu, the Salish, and the Talhtan utilized various wolf-like working dogs that the villagers would use for hunting, fishing, and load-carrying. Out of these early breed types, two more specialized breed categories emerged: the Coastal Eskimo Dog of the oceanic areas, and the Alaskan Interior Village Dog of the inland regions.

Sled dogs had been in use in snowy regions around the world for centuries, but with the increase in population in Arctic areas in the seventeenth and eighteenth centuries (including the migration to Alaska by Americans), sled dogs became much more popular as the method of transporting people and supplies. Alaskan residents began crossbreeding various types of dogs, chiefly the Coastal Eskimo and the Interior Village, to create a breed type that became known as the Alaskan Husky. Meanwhile, individual villages began holding sledding competitions in order to find the fastest, most durable sled dogs; these new Husky breed types, which were by then even more diverse because breeders were adding dogs like the Siberian Husky, the Greyhound, Spitz breeds, and various pointer breeds to the genetic pool, dominated these competitions.

The Klondike Gold Rush in Northwestern Canada in the late nineteenth century furthered the Alaskan Husky's popularity even more. The breed type became prized for its unmatched speed and endurance as a sled dog, as nearly 100,000 prospectors descended upon the Yukon territory in search of treasure and needed the best possible method of transport. With the twentieth-century advent of sledding competitions like the Iditarod (the annual long-distance sled race across Alaska), Alaskan Huskies' value (and number) increased further still.

Today, Alaskan Huskies are primarily used in sledding competitions, if not as personal companions. Breeders use the genes of numerous other breeds, including the Siberian Husky, various Spitz breeds, the Greyhound, the German Short-haired Pointer, and the Irish Setter, among others, to produce incredibly athletic (and expensive!) racing dogs.

As it is a breed category rather than one specific breed, the Alaskan Husky can vary somewhat in appearance from dog to dog. A typical Husky, though, is medium-sized, lean but muscular, and a bit greater in length than in height.

A Husky's body is streamlined and built for speed. The head, depending on the dog's genetics, can be blocky or wedge-shaped; the eyes are medium-sized, almond-shaped, and usually brown. (An Alaskan Husky with blue eyes is a bit rare, and may occur if the dog has a Siberian Husky as a parent, since many Siberians have blue eyes as a genetic trait.) The muzzle can be medium to long in length, and the ears are usually triangular and erect. The Husky chest is normally quite narrow, the body long and supple, and the back will often slope slightly from front to rear. The legs are long, graceful and toned, and the paws are medium-sized with thick pads. The tail is normally long, straight, and fairly bushy.

The Alaskan Husky's coat can vary, but is usually of medium length and double-layered.

Due to the varying genetics of the pure breeds and crossbreeds included in this group's gene pool, Alaskan Huskies can have a vast array of coat colors and patterns. Some of the more common coats are 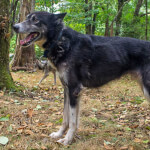 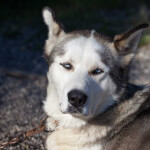 Though their other physical characteristics can vary a good bit, generations of breeding have created a standardized Alaskan Husky size for dogs of this category. Average height for both sexes is 23-26 inches at the shoulders; fully grown males normally weigh 40-60 pounds, and females weigh 35-55 pounds.

23-26 in
*Height is measured in inches from the front paws to the top of the shoulder while the dog is standing on all four legs.
35-60 lbs

The genetics of an individual Alaskan Husky can have such great variation that "Alaskan Husky" describes a category of crossbreeds rather than an individual one. Most Alaskan Huskies are multi-generational crosses, and have F1B to F3B status (meaning one parent was a crossbreed). Here is a partial list of dogs that contribute to the gene pool:

Most Alaskan Huskies have double coats of medium length, but a few dogs of this category (particularly ones whose bloodlines are developed in warmer climates) are short-haired.

In regards to size, breeders will consider a dog's purpose while developing its bloodline. If a dog is meant for hauling freight sleds, the breeder might include a Saint Bernard in the breeding; if for sprint or distance racing, Siberian Huskies or Greyhounds may populate the gene pool. The rare Giant Alaskan Husky is a sub-type of this breed category, and can reach 100 pounds in weight. Meanwhile, the Alaskan Klee Kai (also known as a Miniature/Small Alaskan Husky) is another, smaller sub-type, and is usually the hybrid of a Husky and one of several small Spitz breeds; Klee Kais normally weigh less than 15 pounds.

Independent, active, affectionate,even-tempered, and playful, the Alaskan Husky temperament is one of energy and kindness. Dogs of this category have been developed to work hard as part of a team, so not only will a Husky have a fantastic work ethic, but it will also socialize extremely well with other dogs. (In fact, some experts suggest that families should own two Alaskan Huskies instead of one; the dogs will keep each other company and be much happier.) Depending on a particular Husky's characteristics, though, it may not be suited for families with other pets, because if a Husky has a high prey drive it may view smaller animals like cats as prey.

On its own, an Alaskan Husky will tend to think for itself; while not overly intelligent, these dogs were bred to make their own decisions. At the same time, the Husky personality is family-oriented. They're loving and very playful; Huskies will get along very well with strangers, and they have an affinity for jumping on people (but they do so out of affection, not aggression). Huskies are also notorious wanderers--and exceptional escape artists!--so close supervision is highly recommended. Leashes and/or high fences are absolute musts.

Huskies are fairly easy to train. Since their nature is as working sled dogs, they will respond best to high-energy activities. These dogs are also extremely difficult to house-train; allowing the dog to do its business outside will probably be best. And since they have low barking tendencies, and are very receptive to strangers, Alaskan Huskies make poor watchdogs.

Though an Alaskan Husky is at its core a working dog, it can be a great family companion. Without a doubt, a baby Alaskan Husky might be the cutest puppy in existence--and these dogs keep their playful puppy spirit as they age. Huskies are affectionate to any humans they come in contact with, and they are fantastic outdoor playmates. And for people who live in snowy areas, there is no better dog for pulling the kids on a sled.

Below are pictures and images of the Alaskan Husky breed. 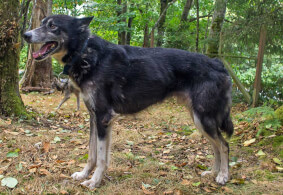 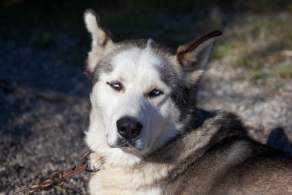 Though fairly healthy overall (lifespan up to 15 years), some Alaskan Husky crossbreeds can develop genetic defects like progressive retinal atrophy (an eye issue that can cause blindness), or hyperthyroidism. Dogs of this breed category may also inherit a condition called laryngeal paresis, which is a partial paralysis of the larynx opening in the throat. This issue causes an affected dog to wheeze and have difficulty breathing; these dogs are often referred to as "wheezers."

The following dog breed registries and organizations recognize the Alaskan Husky as a dog breed: